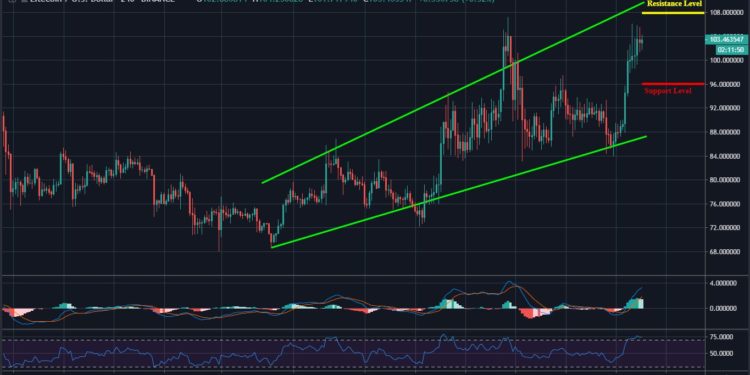 The 24-hours positive has turned the LTC market on a bullish trend after a medium-term bearish trend. While the buyers now aim at the next price level, the market may need to retest the previous support before soaring high.

For the past three weeks, Litecoin market has remained in an ascending broadening wedge, following a bullish scenario. After trading below the $96 for over a week, the cryptocurrency broke out yesterday, touching the $105. LTC price has since been held above the $100.

Ahead of the bulls lie close resistance at $108, where the top wedge is positioned. The trend may turn down after testing then above resistance. If the bullish momentum continues, the price may further fly to $112 and $116 resistances.

On the downside, the seller may encounter support at $96, $92 and $88. The 24-hours positive move was revealed on the 4-hours MACD and the RSI. If the price drops, the indicator may turn bearish.

Yesterday, LTC/BTC pair broke out significantly above the yellow descending trend line, marking a new resistance at 0.013BTC. The price surge was shown on both the RSI and the MACD as they crossed over to the positive area, which might be considered as a bullish sign for the market.

For the upward rally to continue there’s a need for the market to retrace back to the 0.012BTC resistance turned support level before starting the next swing high towards the 0.014BTC and above. If the 0.012BTC support could not hold for a retracement, 0.01BTC support may be visited.

Meanwhile, Litecoin is overbought on the medium-term RSI. The market may fall. The significant cross on the 4-hours MACD reflected an uptrend for the LTC market.

Tron (TRX) Price Sell-off May Continue to Support Level at $0.021

Investors Should Buy Gold After Recent Sell-Off, Here Is Why