After Touching $280, Ethereum Price Plummets – A Retracement Move Is in Play 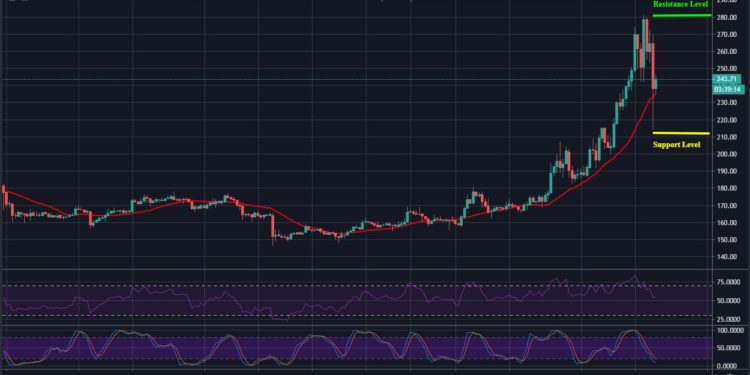 Moving in the opposite direction for over weeks, the Ethereum markets have finally trended in the same movement. Meanwhile, the market has a loss of 8% in the last 24-hours of trading. The token may continue to surge low if the buyers fail to react strongly.

From a medium-term perspective, Ethereum followed a bullish scenario, climbing to the current price of $280 before a slight drop. This revealed that the bulls are gaining control of the market.

The past three weeks of the positive move has been revealed on the 4-hours RSI, which is now trading above the 50 level. A break below this level may lead the market to a significant drop to the oversold territory. On a short move, the price is likely to meet support at $210 and $200 levels.

On the upside, we can expect a bullish continuation to $280and $300 resistance levels. Meanwhile, the 4-hours Stochastic RSI is suggested to be bearish; revealing the sharp drop in the market. As of now, ETHUSD market is still in a bullish territory despite the recent sharp drop.

Finally, the ETHBTC market broke up the falling channel after six weeks of trading. Currently, the price of the token is trading at around 0.033BTC level after establishing high near the 0.035BTC level. As it appeared now, the bulls have gained control of the market. The current drop may encounter support at 0.031BTC and beyond.

We can also see the bullish confirmation on the red 21-day moving average which was crossed up three days ago; now trending below the price action with the positive move. Resuming the upward rally, the next likely resistance we can expect the price is the 0.035BTC and 0.037BTC levels.