LTC Bull Retest The April Level After a Wedge Breakout 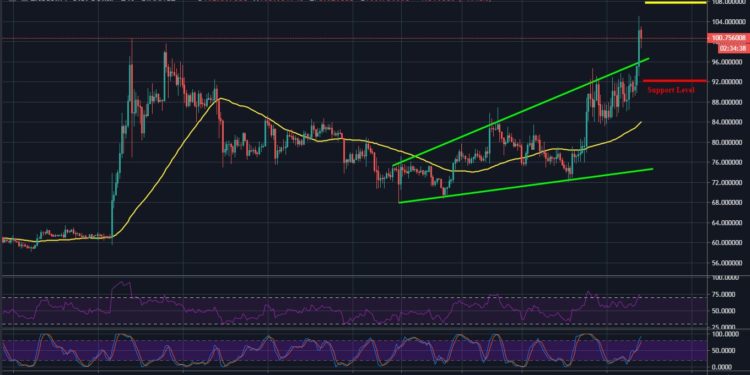 The Litecoin market has been driven in the opposite direction. While the LTCBTC market further falls significantly, the LTCUSD market followed a positive move. The trend would continue until a reversal set in, possibly changing the direction of the market.

After the April price increase, Litecoin plunged to the bottom of $68 and took a u-turn resuming the upward move – a bullish continuation which lasted to the $104 resistance before a slight drop to the current price at $100.7, after breaking up the ascending broadening wedge formation. The bullish move was revealed while the price action crossed up the major 50-day moving average.

The next key resistance level to watch out for is the $108 which is near to the current price. A further rally could touch the $114 and $120 resistance levels. On the downward side, we can expect the price to retest the $92 support level. A break low could send LTC trading back into the wedge, testing $84 and $76 supports.

So far, the 4-hours RSI has been maintaining a positive move, followed by the 4-hours Stochastic RSI which now at the overbought area – a sign of buying pressure.

Despite the current surge in volatility, the LTCBTC market has remained in a decline for the past six weeks of trading. Playing above the price actions, the yellow 50-day moving average reflects the strength of the sellers in the market as it continues to slope down. Meanwhile, LTC trading has remained within the falling wedge boundaries since mid-April.

As revealed on the 4-hours Stochastic RSI, the market is now at the overbought zone. In a short time, we may see a drop. The potential support level to look for is the 0.011BTC, touching the lower wedge. A break low could further lead to the bears to 0.01BTC.

However, a break-up could propel the buyers to an immediate resistance level at 0.014BTC and above. This may set a bull-run for the market. As of now, Litecoin is following a bearish sentiment.