Cardano Bears Are Still In Play, Price May Continue to Plunges 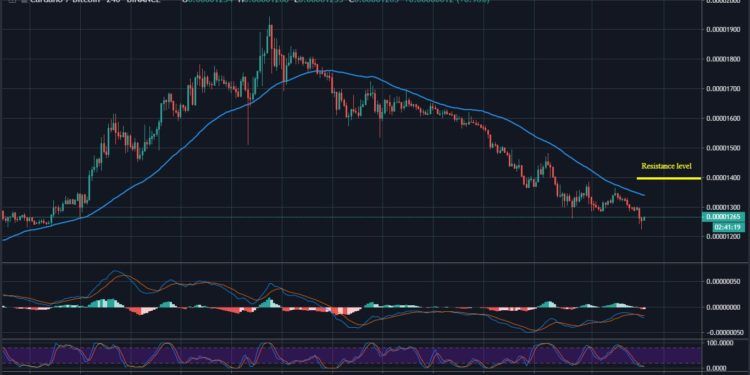 Maintaining a downtrend, ADA continues to respect the important 50-day moving average after a cross low which has led to the current selling pressure in the market. As it appeared on the medium-term trend, the bears are yet to exhaust moment. Waiting patiently, the bulls may take control of the market; as revealed on the MACD indicator, facing the zero level.

Earlier this month, Cardano recorded the quarterly high at $0.01 after advancing on a higher high and higher low trend with the 50-day moving average (blue line) rising along with the impulsive move. Looking at the current market structure, ADA appeared to be following a downward move.

The price drop started after a cross on the blue line which confirmed entry for the sellers as they continue to position the market in a decline. As shown on the important MACD, Cardano drops from 0.005 positive to the negative and has since remained in the bearish zone.

On the Stochastic RSI, the market has reached the oversold region. A possible buy may send the market to $0.075 resistance and above. For a bearish continuation, the $0.06, $0.055 and $0.05 are the next targets.

Against Bitcoin, Cardano has been following a downtrend after a reversal in early April. Today, the selling momentum is revealed to be strong as the 50-day moving average (blue line) trends above the price actions. As long as the blue line continues to point downward, ADABTC market would remain in a bearish scenario.

However, the bears may locate the next supports around 1100SAT and 1000SAT levels. Observing the current MACD, the token has been trading at the negative zone since the market significantly crossed down the zero level on April 8; reflecting the bearish market.

The Stochastic RSI is positioned at the lowest level which signifies a low selling pressure. If the indicator faces upward, the next incline may be considered around 1400SAT, 1500 and above.