The Bears Head Towards a Conflict Support, Tron May Rebound or Break 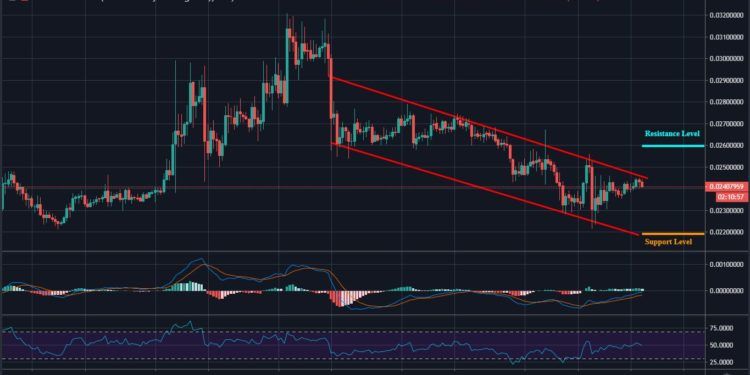 After witnessing a sudden price increase earlier this month, TRX markets reversed and positioned trend in a descending channel which is still intact as at the time of writing. Following the slow bearish correction; Tron approaches the March low which may likely reject or Break price. Whichever way, Tron is trading at $0.02363 price levels.

On a medium-term outlook, TRXUSD market followed a bearish reversal after rising from the low of $0.022 in late March to a high of $0.032 in early April. The enormous sell-off has led and positioned the market in a dramatic selling condition which has actually near the late March’s low price.

As it appeared now, a positive move is likely to meet a potential resistance at $0.026, $0.028 and $0.03 resistance levels. Now, the pair is trading at the 50 level of the RSI as this mentioned level has remained a strong resistance level for the price to surpass in the last two weeks.

However, breaking the level upward could walk the buyers to the said resistance level. The MACD, revealed the current trend at the lowest condition; signifying a bearish market for Tron.

The value of Tron has been depreciating over the past weeks due to low liquidity which has pull price to the lower trend line at a low of 418SAT on April 24. While subdued with choppy price action, TRX market has been on a straight move in the last 48-hours of trading.

Looking at the 4-hours RSI, the current side-way market is shown at the 45 level. A bullish spike is likely to reach 500SAT resistance level, where the upper trend line rests. Above this resistance lie 550SAT and 600SAT levels. However, a bearish spike may retest the previous low at 418SAT before locating a new one around 500SAT below.

After a significant cross on the 4-hours MACD, TRX market remains bearish on a medium-term outlook.