A Bullish Reversal Is in Play For Ripple Market 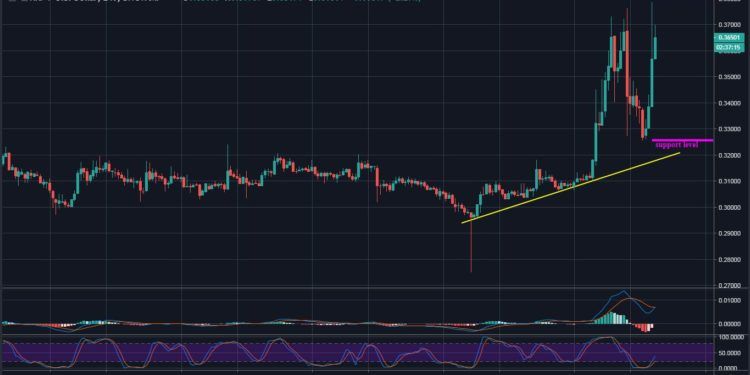 For the past few months, Ripple market has been moving in the opposite direction. But as of now, it appeared the market is about to follow the same direction. XRPUSD is reversing as XRPBTC is yet to break a descendant resistance line. Today, XRP is up by 7% with a market cap valuation of $15.5 billion

Ripple appeared following a bullish reversal after maintaining a medium-term consolidation; respecting the yellow trend line. The bulls are gaining control of the market. A spike is nearing $0.038 resistance. The 4-hours MACD revealed a clear positive move. If price surpasses the above resistance level, a push is more likely at $0.040 and $0.043 resistance levels.

A look at the 4-hours Stochastic RSI suggests a buy trade; aiming the 80 level. The bears may have to wait for a smart entry which is likely at the overbought zone. A bearish move to watch out for lies at $0.0325 support level; near the yellow trend line. A break below the support could significantly slump price to the low of $0.031 and beyond; repositioning Ripple in a bearish condition. As of the time of writing, XRPUSD remains in the bulls’ dominance.

Despite the recent bull-run in the crypto space, Ripple’s value has remained substantially low since the beginning of the year 2019; following a bearish sentiment. As revealed on the 4-hours MACD, the market is positioned in the negative zone.

The 4-hours Stochastic RSI lies close to the oversold line; suggesting a buy. The incline could test the yellow trend line. A break up on the line may throw price at 7800 SAT resistance level and above. If such a scenario occurs, the bulls are likely to gain control of the market. The MACD indicator should significantly reflect above the zero level.

However, a further pull could drop price to retest 6750 SAT support. A breach on the support may sink trade lower. As it stands now, Ripple appears to be on a reverse. A surge above the yellow trend line should confirm a positive move.

Tron (TRX) Price Sell-off May Continue to Support Level at $0.021