Bitcoin Explodes from a ‘Coma’ Rising by 20% within Minutes 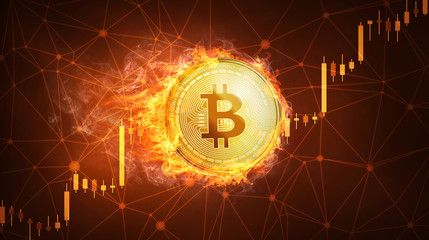 The largest cryptocurrency price surged massively from $4,200 to nearly $4,800 within minutes. That represents a 20% gain in a short time frame. Data reveals that bitcoin’s (BTC) price appreciated on Tuesday at 04:32 UTC to $4,715. The spike was accompanied by a large injection of daily bullish volume. It enabled the most popular digital currency to close out the hourly trading period $668 higher.

The $4,200 resistance level proved as the strongest hurdle yet in the road to recovery where BTC struggled to break out of for over four months. The resistance broke down resoundingly on early Tuesday morning leading to a turn in most of the technical indicators. Bullish sentiments returned to the market enabling the entire cryptocurrency market to rise considerably.

Currently, bitcoin is oscillating around $4,670 representing 13% gains in 24 hours. At some point, the cryptocurrency was trading at around $4,926, breaking out from a defined area of resistance at $4,192. Currently, the market continues in a positive trend of higher lows and higher highs.

Are the Bitcoin Bears Trampled Entirely?

Earlier in the week, Alex Krüger, economist and global markets analyst, made some interesting remarks. He said that any movement above the $4,200 level will mark the end of the bearish sentiments holding the markets since January 2018, lasting 16 months.

The new momentum of bitcoin from breaching the $4,200 resistance level led it to break out of four other crucial resistance zones. Analysts think that reaching $5,500 in the upcoming days is possible. On April 1st, a technical analyst said that an $80 million sell wall was pegged above $4,200.

That's what no resistance looks like. Nothing but hot air above 4200. The longer the wait, the harder the break. This is what technical analysis is for. $BTC +20% in 45 minutes.

Buyers had to absorb the $80 million to push BTC price above the strong resistance level. Once the level got broken, it led to a short squeeze on major trading platforms. That, in turn, intensified the upside movement towards $5,000. Whether the bears are finally defeated or not only time will tell. For now, the markets keep enjoying an upward trend.