After Consolidating, Verge Resumes an Upward Movement in a Carved Channel 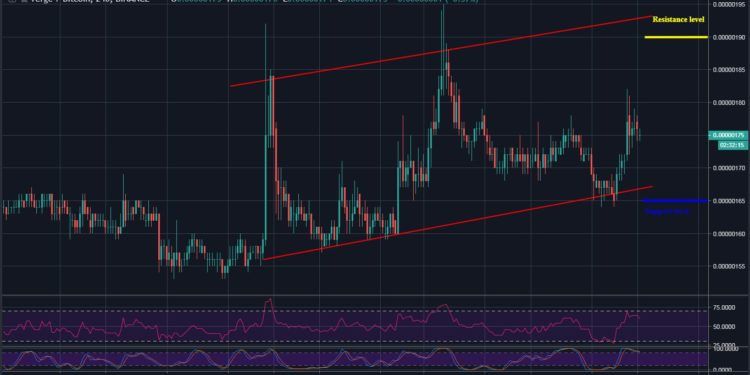 For the past one month, Verge has been maintaining a higher high, higher low pattern after the February reversal; gaining roughly 50%. Currently, the token cumulatively records a market cap of $117.6 million. However, XVG market has been following the same pattern and direction.

Verge appeared to be waving in an ascending channel following a sharp reversal in early March which resulted in a positive move XVG is experiencing now. After testing $0.0066 at the lower channel on Monday, XVGUSD demand level bounced up price as it gradually climbs to the upper channel; meeting $0.0076 and $0.0078 supports and above.

Meanwhile, the 4-hours RSI is revealed at a close to the overbought level. A further positive move would throw price higher. As revealed on the 4-hours Stochastic RSI, selling pressure could play out for this market. The key support level to look for is $0.0066, where the trend line lies. A cross down on the mentioned level is likely to drop price to $0.0063 and $0.006; positioning Verge in a bearish condition. As of the time of writing, XVG followed a clear bullish sentiment for quite a long period.

After consolidating around 115 SAT area, Verge saw a bullish surge and started to follow an ascending channel pattern as price action expands; showing an increasing trading volume. Currently, the Stochastic RSI suggests a downward move which may likely retest the lower channel near 165 SAT support level.

Breaching the mentioned support could fall back price to the February low at 155 SAT Support. By then the medium-term RSI would be facing down. Similarly, an upward rally is expected at a resistance of 190 SAT, 200 SAT and 220 SAT. Looking at the 4-hours RSI, XVG is yet to swing clearly at the overbought level. As of now, the bulls are steadily gaining control of the XRPBTC market as the bears just got exhausted on selling pressure. However, Ripple could experience more greens in the coming days.