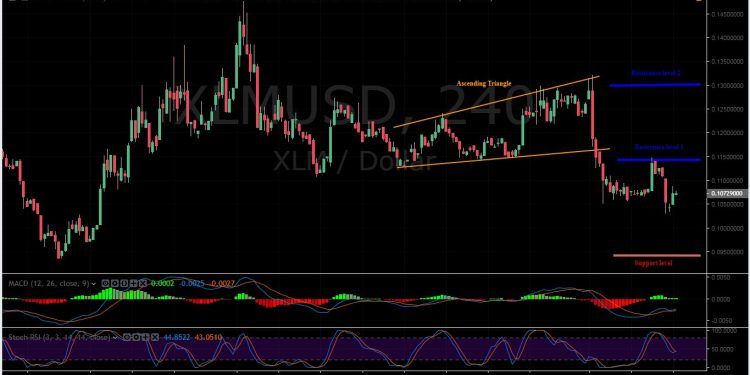 Stellar-Bitcoin market maintains a bearish trend over two months. From the bullish, its Dollar market fell. Both markets are now declining. Currently loss about 3.9 %.

On the ascending triangle, Stellar (XLM) witnessed a low break at the $0.11 strong support level (now resistance) due to Bitcoin’s fall. The impact was high on altcoins. As of now, the 24 hours volume is estimated at $124, 899, 413 according to CoinMarketCap.

Before the last week break, price action has been testing this support level more frequently; but often bounces up. The sell-off was enormous. In fact, the MACD quickly oscillates downward to reflect the change in trend.

After the break, a retracement run to re-touch $0.11 resistance level and bearish move continues. Revealing by the Stochastic RSI; hovering to the overbought and now heading for the oversold. The next decline is expected at $0.09 support.

Between late December 2018 and early this month, trading volatility and activity were low due to the holidays. But since last week, it has been increasingly significant. See MACD showing the inactive and non-volatile sessions compare to the recent move.

However, breaking the resistance level 1 would fly price to resistance level 2 at 3300 SAT. Sinking the support level, new support would be tested. By then, the Stochastic RSI should be at the oversold. 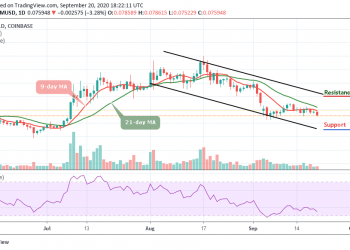 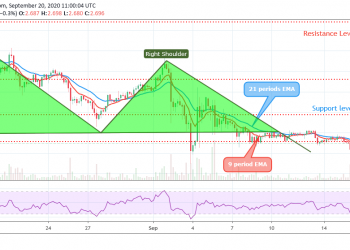