In the last 24 hours, the markets experienced a massive sell-off that has taken a toll on most of the cryptocurrencies. However, LONG positions are dominating. 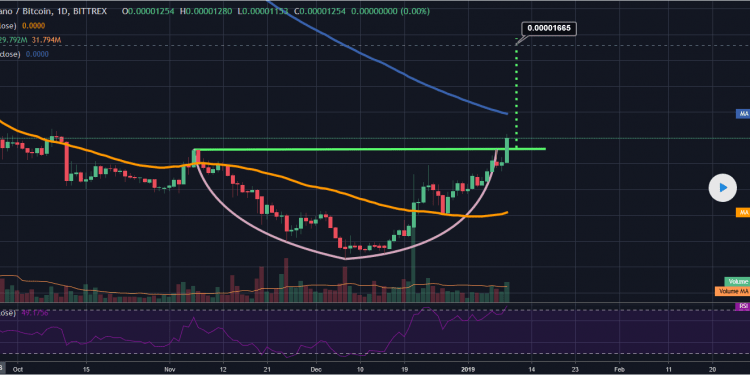 Some analysts strongly believe that the crypto market will stage a formidable turnaround in 2019 after the bears thrived in 2018. While the falls have extensively mauled traders’ accounts, cryptocurrency adoption has maintained its speed. The adoptions and blockchain developments have supported the prices from falling further in some cases. The year has started with some recovery although the markets remain quite volatile.

The cryptocurrency markets have experienced mixed reactions with some token rising and others plunging. Although the prices in the markets are relatively below their all-time highs, more large players are investing in the crypto markets. In the last 24 hours, the markets experienced a massive sell-off that has taken a toll on most of the cryptocurrencies.

After consolidating since the start of 2019, EOS suffered from the widespread cryptocurrency dumping in the last 8 hours. The token has lost over 8.45% bringing in some bearish sentiments into the market. Currently, it is trading at around $2.59. However, experts still believe that it remains in a bullish trend with regards to its medium-term outlook.

The bulls’ target at the $3.00 level in the supply area which was forecasted in yesterday’s analysis was achieved before the end of yesterday’s session with an additional push to $3.03. The bears were bound to return due to exhaustion in the bullish momentum shown by wicks in the candle.

The prices dropped to $2.72 as the bears took over the market. If the price slides further, it can retest the $1.772 support zone. However, there is a small support forming at the expected consolidation at the level of $2.48. If this support breaks, the downtrend will continue. Therefore, the stop loss on the proposed long positions can be maintained at $2.29.

A rejection of the price pegged near the level of $3.20 makes the 50-day EMA an important and valid level of massive resistance. Other important levels of resistance to watch are forming near $4.68 and $5.0.

Before the latest plunge, the ADX/DMI indicator had confirmed a significant trend change from the downtrend to uptrend, with the +DI line crossing above the -DI line. Based on Fibonacci ratios have settled on the swing high of $5.81 and a swing low of $1.54. Additionally, the 0.50 and 0.618 retracement levels are pegged around $3.68 and $4.18 respectively.

This clear range of $3.68-$4.90 is the forecast for the price of EOS by the end of 2019 as stated by several experts and analysts. In the case that the price gets back above the downtrend line it could favor the short-term traders who can stay on the long side of the trade. But, experts say that it is best to adopt the ‘wait and see’ approach for this market.

TRX is maintaining a bullish trend in its short- and medium-term outlook. The strong bullish pressure sustained the momentum as the price rose consistently in the last three days to $0.02749 in the supply area. The recent market drop out of nowhere has not affected TRX as it has done to most of the other cryptocurrencies.

Analysts had stated that the bear attack was imminent since the bulls showed a brief exhaustion that was denoted by candles with wicks. $0.02584 was the lowest price recorded yesterday. The 10-EMA is seen consolidating and acting as strong support after each pullback to the markets by the bears. The bulls went on the rampage with increased momentum represented by a large engulfing candle.

The price is currently hovering above the two EMAs which are fanned apart which signifies strength in the uptrend. The stochastic oscillator signal is trending in the overbought region 80% and it signal points up for now. This implies an upward momentum in price with the token in the ascending channel.

Bitcoin Cash is yet to find solace as the market remains volatile. After the impressive rise before Christmas, BCH seemed to have found consolidation above $180. However, it kept rising and falling making it an excellent investment for the short-term speculators. Since the start of 2019, the digital currency has oscillated between $155 and $172 and analysts thought that it was ready to rise again.

However, the fall on Thursday morning happened in less than two hours with BCH dropping from $161 to around $139. The bears are currently ruling in the market with the token having tested lows of $129.55 in the last few hours. The price has since pulled back to around $136 with a support level forming at $132.06.

An effort to dismantle the $130 support did not succeed and the price bounced back slightly and it is currently trading at around $136.80. Strong

psychological support exists at around $125.78. If the price recovers strongly from the support zone, a significant pullback is probably to take it to the 20-day EMA levels. At the current market state, it is advisable to wait for the decline to stall before executing and transactions. Currently, the market has the trace of any bullish or positive sentiments.

Cardano (ADA) was trading in a range-bound market since the start of the year and it looked to remain that way for the long-term. The bulls had enjoyed control within the $0.0513 and $0.0534 range since the turn of 2019 with a formidable bullish railroad formation. However, the crypto winter seems to have come back. In less than an hour, the ADA price dropped sharply from $0.05429 to $0.04804.

Since then, the bears are ruling the market with the token currently trading at $0.046617 representing a decline of around 9% for the past 24 hours. The stochastic oscillator signal is pointing down at 37% an indication of downward momentum in price. That suggests that the bearish pressure may dominate within the range in the near-term as the price consolidates near the lower supply area.

Currently, the price is oscillating between $0.04571 and $0.04671. The nearest resistance is forming around the $0.05200 level while the lower demand area is pegged at $0.03800. The bears may rule for the short-term but the long-term charts indicate that ADA is still on a gradual neutral/upward trend. 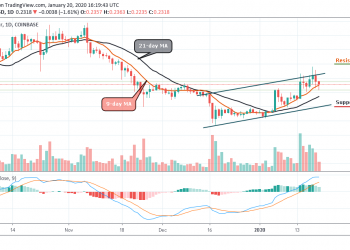 Ripple Price Analysis: XRP/USD Plunges Below $0.240, How Much Lower Can It Go? 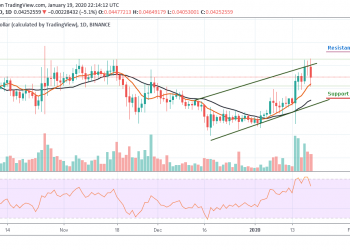 Cardano Price Analysis: ADA/USD Plunges as the Price Drops by 5.1% 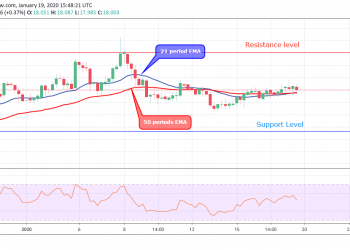