The overall sentiment on cryptocurrency is more positive as we are currently having a biggest bounce back since the middle of October when Tether sell-off caused Bitcoin's price soar. 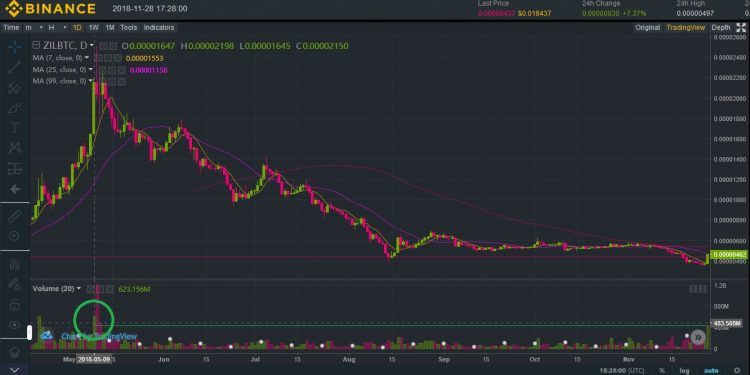 Amidst significant drop in the price of Zilliqa[crypto coins=”ZIL” type=”text” show=”percent”] digital currency, it has issued an update on its forthcoming Testnet v3, as well as, public mining. Though the price, according to CoinGecko, has recovered over 17 percent in the 24-hour period and is currently traded arround $0.0186.

What’s more interesting it appears that buyers are back for Zilliqa[crypto coins=”ZIL” type=”text” show=”percent”] as there weren’t so much volume since May 9, 2018.

The overall sentiment on cryptocurrency is more positive as we are currently having a biggest bounce back since the middle of October when Tether sell-off caused Bitcoin’s price soar.

According to a Zilliqa[crypto coins=”ZIL” type=”text” show=”percent”] blog, its focus is to double-down on development apart from launching mainnet by January end next year. Towards achieving this goal, it has been working hard to meet the deadline and plans to release Testnet v3 in the upcoming week.

Following this, Testnet v3 will allow mining of testnet ZIL[crypto coins=”ZIL” type=”text” show=”percent”] in public and enable miners to start testing their systems. This will make it ready for its mainnet launch.

The blog explained that it has shared with Mindshare to discuss Project Proton during the Singapore Digital Industry Day. The company disclosed that it is committed to integrating the campaign databases, as well as, smart contract before the current year ends. The company added,

“We recently announced the second wave of ecosystem grants that includes wallets, developer and user tools. For the third wave, we will be actively seeking applications for scalability (layer 2 solutions), gaming SDKs, Dapps, and Scilla additions.”

Zilliqa[crypto coins=”ZIL” type=”text” show=”percent”] disclosed that it is focusing on increasing its activities in London and kicked off the future of blockchain. This is a three-month competition meant for those studying or working or researching at different universities like Cambridge, Oxford, KCL, UCL, LSE, and Imperial. It will commence anything this November and close in late March next year with a finale at Oxford.

At the same time, some experts believe that ZIL[crypto coins=”ZIL” type=”text” show=”percent”] is worth more than the current value as its blockchain platform for hosting decentralized applications is unique and highly scalabe with an ability to perform over 2800 transactions per second which is really impressive compared to a regular blockchain with 7-15 transactions per second.

According to official document Zilliqa[crypto coins=”ZIL” type=”text” show=”percent”] focus to further increase the scalability of the blockchain and dApps running on ZIL blockchain to gain 100x to 1000x over today’s public blockchain platforms.