Investors want to trade in a commodity that underlies that ETF makes sense and is not vulnerable to manipulation. 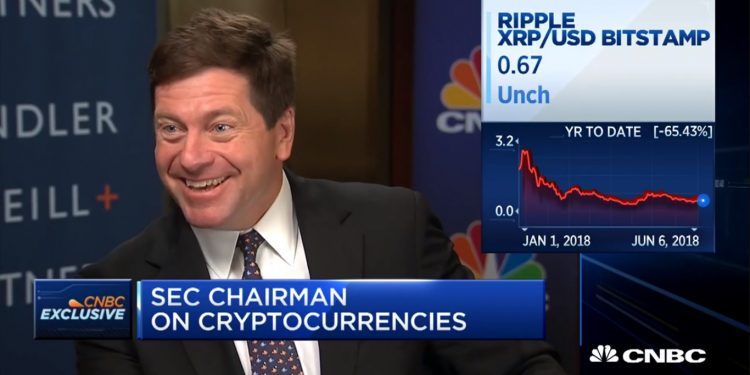 In recent months, crypto enthusiasts have eagerly awaited the approval and launch of the first ever Bitcoin ETF (exchange-traded fund). However, the Securities and Exchange Commission Chairman Jay Clayton has raised several issues that must be addressed before he becomes ‘comfortable’ approving the new investment medium.

First, he is worried about lack of market surveillance. Since a majority of the crypto exchanges have different monitoring tools from the stock exchanges, Clayton stated that investors may not get an accurate assessment if the price of bitcoin. Investors want to trade in a commodity that underlies that ETF makes sense and is not vulnerable to manipulation.

Clayton was speaking at the Consensus Invest Conference in Manhattan where he emphasized on the need for proper surveillance framework to get established for the crypto markets. The Nasdaq and the NYSE have systems that monitor, prevent, and investigate any abusive and manipulative activity on the exchanges. These surveillance frameworks protect the investors from losing their investments illegally.

The market safeguards are absent in the digital currencies exchanges which increases the risks in trading in the crypto market. However, in April 2018, Nasdaq announced a collaboration with Gemini currency exchange founded by Cameron and Tyler Winklevoss. The deal gave Gemini access to the Nasdaq surveillance technology ensuring the platform offers a fair and ‘rules-based marketplace’ for all users and participants.

Exchange-traded funds track a specific group or index of assets although they trade like stocks. Experts and analysts think that the approval of the BTC ETF could attract more institutional buyers pushing the price of Bitcoin upwards since the crypto has a theoretically fixed supply.

The SEC agency has repeatedly rejected multiple applications for the development and launch of a crypto ETF. In its decision to reject the Winklevoss brothers’ ETF, the agency highlighted the risks of market manipulation and fraud together with investor protection challenges.

Storage of the crypto assets is a major challenge. Although the crypto market and bitcoin prices are volatile, investors may also get exposed to theft of underlying assets. Clayton told Silver Lake Partners’ Glenn Hutchins that some digital currency scams and thefts still remain complex to solve. The assets underlying the ETF also need excellent custody hence providing a surety that they will not disappear.

Many cryptocurrency custody solutions have either been announced or already exist on the market. Fidelity reported in October that they plan to launch a separate company deal with all crypto custody matters and execute trades for institutional investors. Various crypto companies including ItBit, Ledger, Coinbase, BitGO, and Gemini are already working on viable solutions.

Clayton also told those issuing ICOs to always start with the assumption that they are starting with a securities offering that is subject to SEC laws. In June, the chairman stated categorically that the agency would never bend rules when determining what is and what a security is not in the case of the crypto market. The US has created a $19 trillion securities’ market using the current rules.

The ‘Howey Test’ determines which asset is a security currently. The SEC stated that ETH and BTC are treated as commodities. Hence, they are not subject to the test. However, all other cryptos are considered as securities by the SEC and require to get registered with the agency. The SEC has penalized multiple ICO and crypto projects in a crackdown aimed at rampant fraud and abuses in the budding digital industry.

Unlike Securities and Exchange Commission Chairman Jay Clayton another Commissioner Hester Peirce in the interview hosted by whatbitcoindid said that she sees a future in the digital currency market and believes the launch of a future cryptocurrency ETF is ‘definitely possible‘.